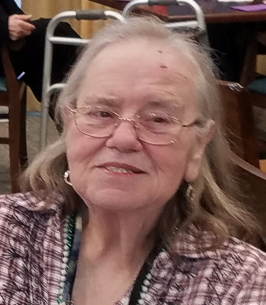 Victoria E. Hixon, 77 of Sioux Falls, SD passed away Wednesday, June 23, 2021, at LifeScape Group Home in Sioux Falls.
Victoria E. Hixon was born august 18, 1943 to Harry and Alzada (Bymers) Hixon. She was the youngest of 12 children. Vickie was raised on a farm near Frankfort, SD until moving to Aberdeen. There after the passing of her mother, she moved in with her sister Jerri and husband Charles “Okie” Row. After several years in Aberdeen, Vickie moved with Jerri and her family to Sioux Falls, where Vickie was enrolled with Sioux Vocational School for the Handicapped, now known as LifeScape. After nearly 25 years in 2002 Jerri retired and moved to Yankton, but Vickie chose to stay in Sioux Falls with her friends and boyfriend Doug. She was a resident at Stephen House for many years and this was her home. Her Lifescape family meant so much to her and her family greatly appreciates the love and care she received for so many years from LifeScape and the wonderful Stephen staff. Vickie was sunshine and sometimes fire. She was strong, but weak. She loved with all her heart and brought joy to so many.
Vickie is survived by one sister Bonnie Marlow, Redfield, SD, and sister-in-law Marion Hixon, Cheyenne, WY, and many, many nieces, and nephews. She will especially be missed by her niece Kim (Row) Loecker and husband Mark of Yankton and great niece Brooke Loecker, and Colton Frohreich of Sioux Falls.
Vickie was preceded in death by her parents Harry and Alzada Hixon, sisters Pat (LaWayne) Dobberpuhl, Opal (Elmer) Wolff, Irene Boylan (Jim) Nielson, Ruth (Lucky) Burr, Jerri (Okie) Row, Faye Weinries, Dorothy Nielson, brothers Bill (Bea) Hixon, Bob (Dorothy) Hixon, Harry Hixon Jr., and brother-in-law Vern Marlow.
To send flowers to the family in memory of Vickie Hixon, please visit our flower store.