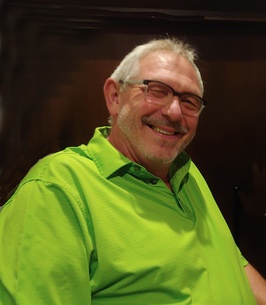 Joseph David Hoffman, 61, of Vermillion, SD passed away Sunday, June 20 in Avoca, Iowa.
Joseph David Hoffman born May 1, 1960, in Viborg, SD to Geraldine (Johnson) Hoffman and Joseph B. Hoffman, went peacefully in his sleep to his heavenly reward on June 20th. Joe spent the early years of his life living on his maternal grandmother’s farm, located just south of Centerville, SD. It is from her he learned his strong faith, love of antiques, baking, cooking and flair for entertaining. It was her guiding hand that led him to be such a positive role model to his grandchildren and countless others.
He graduated from Beresford High School in 1978, from there he went on to Southeast VoTech to pursue a degree in Horticulture/Landscaping. Following his graduation from Southeast he was employed at the University of South Dakota as a Landscape/Gardener. One of the highlights during his time with USD was having the honor of designing the Shakespeare Garden.
While employed at USD he met the love of his life Shawn (Sampson) Hoffman. They were married 1 year and a day from the day they met. They celebrated 32 years of marriage on June 16th. When he married Shawn, he also became dad to Kimberlee Bea and Kristopher Lee and eventually adopted them as his own.
Following their marriage, he was hired at the Federal Prison Camp (FPC) in Yankton, SD as the Horticulture Instructor, where he remained until his retirement in 2017. While at FPC he mentored hundreds of men. Men under his guidance created many memorable garden designs on the FPC compound and in communities in the surrounding area. In addition to working at FPC, he with business partner Penny Reed, traveled the country buying and selling antiques. He also took great pride in the landscaping and gardening of his yard.
In recent years, the true light of his life was the time he spent with family and in particular his grandchildren. Retirement for Joe involved giving his grandchildren daily rides to school, teaching them to cook, bake and providing a weekly family history night.
He is survived by his wife of 32 years, Shawn, daughter Kimberlee (Hoffman) Brown and son and daughter-in law Kristopher and Becky Hoffman. His shining glories grandchildren: Gage, Shayleen, Masen, Kayley, Gabrielle, Isabelle, Mercedes, Tarynn, Siri, Marley, Kristopher Jr., Benjamin, Leeland and great grandchildren Steven, Emersyn and a baby girl due in September.
Joseph is also survived by sister Kathy and sister-in-law Ruth. He is also survived by many beloved nieces, nephews, cousins and friends. Those closest to Joe knew that nothing was more important than his family and friends.
He is preceded in death by his grandparents, parents, brothers Ronnie and Bill, in addition to other cherished family members. He has been happily reunited in heaven with family members and his pets.
Due to poor Internet quality the memorial service will be recorded and uploaded to www.facebook.com/hansenfuneral immediately following the service.
Any memorials received will be divided between Pleasant Valley Lutheran Church, Clay County Historical Society and the creation of a scholarship at Mount Marty College.
To send flowers to the family in memory of Joseph D. Hoffman, please visit our flower store.

Memorial services will be recorded and then posted to Facebook due to poor WIFI at the church.

Ashes will be buried privately at a later date.