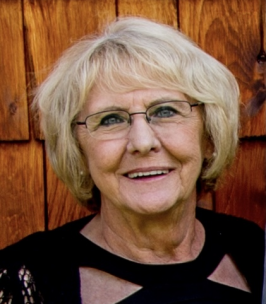 Virginia "Ginny" Anderson was born to Lyle & Eileen (Schlagel) Cook on August 16, 1952 and grew up in the Sioux Falls Area.
She had a very loving family including her five sons: Richard "Rick" (Nancy) Getman, Mark Getman, Cregg (Heidi) Getman, James Donahue, and Christopher "Chris" (Jana) Anderson. Her Grandsons Blake Getman, Christian Anderson, Gage Getman, Garrett Getman, Lyric Donahue, August Getman. Granddaughters Brooke Getman and Zoey Anderson.
After two of her boys graduated high school she pursued her higher level eduation at Lake Area Technical Institute in Watertown, SD where she graduated with honors as a Laboratory/Radiology Technician. She began working at Pioneer Memorial Hospital in Viborg, SD in 1992 where she worked up until her untimely death.
She met the love of her life, Ivan Anderson, and they got married May 8, 1993 at Our Savior Lutheran Church in Viborg, SD. They were married 27 years.
Ginny enjoyed many hobbies including riding horse (Barrel Racing), playing cards (Pinochle), sewing, and spending time with friends and family.
She was preceded in death by her parents (Lyle & Eileen) brothers Richard Cook and Lyle "Bo" Cook and very special friends Viki Turbak and Eileen Nelson.
She was happy to have shared her life with her siblings Vernon Cook and Joni (Kevin) Jennings.
To send flowers to the family in memory of Virginia "Ginny" Anderson (Cook), please visit our flower store.

A prayer service will begin at 7:00PM.

Services will be live streamed at www.facebook.com/hansenfuneral