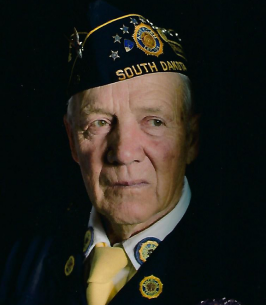 Leo Harold Bohlmann of Wakonda, SD passed away Wednesday, March 10, 2021 at the Wakonda Heritage Manor at the age of 89.
Leo was born October 1, 1931 to Richard and Magdalena (Zeeb) Bohlmann. He was baptized and confirmed at Martinus Lutheran Church, rural Utica, SD. Leo grew up on a farm in rural Lesterville, SD and attended school at Odessa #41 in Yankton County. On September 9, 1952, Leo was drafted into the US Army and served in the Korean War until August 7, 1954 when he was honorably discharged. Leo helped build the Gavin’s Point Dam at Yankton, SD. He farmed near Wakonda where he enjoyed raising cattle for many years until entering the Wakonda Heritage Manor in July of 2019.
Leo married Norma Paulsen on June 30, 1957. To this union, two children were born, Michael and Nancy. On September 16, 1972, he married Patricia Coughlin. To this union, one child was born, Angie.
Leo was a member of the Gingrich Dixon Post 13 American Legion of Wakonda for over 60 years. During this time, he was active on the firing squad and later served as Sargent at Arms. He also belonged to the Ernest-Bowyer VFW Post #791 of Yankton, SD. Leo was proud to be part of the 2019 Midwest Honor Flight to Washington, D.C. to visit the war memorials.
Leo is survived by his three children: Michael (Diane) Bohlmann of Volin, SD, Nancy Schaffer of Fargo, ND, Angie (Lyle) Stratman of Volin, SD; six grandchildren; Christe (Jared) Hybertson of Centerville, SD, Chelsa (Andy) Gall of Yankton, Ashley Schaffer, and Amber Schaffer both of Fargo, ND, Justin Stratman and Kevin Stratman both of Volin, SD; five great-grandchildren; Hogan, Hadisyn and Henley Hybertson of Centerville, and Elly and Eve Gall of Yankton. He is also survived by sisters: Lucille Musil of Mission Hill, SD; Berniece Slupe of Brainerd, MN, and Janice (Steve) Cahoy of Tabor; brother-in-law, Louie Ruman, Tabor, SD; sisters-in-law: Gloria Bohlmann of Menno, SD; Donna Bohlmann of Tyndall, SD; Delores Bohlmann of Yankton, SD, and Marcene Bohlmann-Shutt of Tyndall, SD and a host of nieces and nephews.
He was preceded in death by his wife, Pat, in 2018, his parents, grandparents and brothers: Oscar in infancy, Elmer, Rudy, Leslie, Danny, Bobby and Melvin Bohlmann; sister: Mildred Ruman; sister-in-law: Beverly Bohlmann; brothers-in-law: don Musil and LeRoy Slupe and niece, Lori Schrempp.
**Service will be livestreamed at www.facebook.com/hansenfuneral
To send flowers to the family in memory of Leo Harold Bohlmann, please visit our flower store.

*Service will be livestreamed at www.facebook.com/hansenfuneral *Masks will be required. Please practice social distancing.