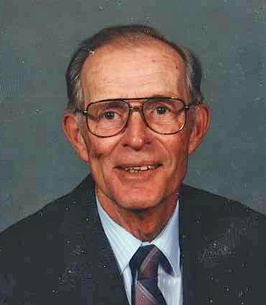 Robert D. Brown, 95, of Sioux Falls, SD, formerly of Vermillion, SD passed away on Friday, October 25 at Grand Living at Lake Lorraine in Sioux Falls.
Robert was born March 18, 1925 in Minneapolis, MN, his parents were Frank and Lois (Ferry) Brown, he attended Vermillion schools and graduated from Vermillion high school in 1943. Bob enlisted in the US Navy in 1943 and was discharged in 1946, and he married Elaine Hansen on January 31, 1950 in the Trinity Lutheran Church in Vermillion where they have maintained their membership for 69 years.
After his discharge in 1946, he was employed by the City of Vermillion Power and Light Dept. where he worked for 41 years. At his retirement, the city named a substation in his honor.
Bob was an avid reader and enjoyed camping and even joined a camping club in 1982. He delighted in keeping busy as an amateur mechanic and repairman and liked to engage family and friends in indoor and outdoor games.
He is survived by his wife Elaine of Sioux Falls, James (Donna) Brown of Highland Ranch, CO and Michael (Jeanne) Brown of Sioux Falls. Four grandchildren: Ashley Moisan, Katrina Heimes, Christopher Brown and Timothy Brown. He was preceded in death by his parents and a son Richard.
To send flowers to the family in memory of Robert Brown, please visit our flower store.