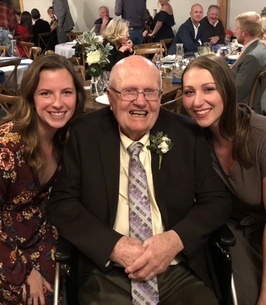 Duane was born on November 4, 1930. He married his sweetheart, Lorraine Mockler, on June 11, 1953. He and his wife owned Brunick Body Shop and Brunick Trailer Court for many years. He was an avid USD Coyote fan. He attended and graduated from the University of South Dakota. He lettered in football, basketball, and track while attending USD. He was a member of the fraternity Delta Tau Delta. He joined the US Army in 1954 and upon discharge in 1956 was Commander of National Guard in Vermillion for 3 years. Duane was also a member of the Fraternal Order of Eagles and St. Agnes Catholic Church in Vermillion. His other enjoyments in life were driving stock cars, hunting, league bowling, having coffee with friends, and being with family.

He is survived by two sons; Rick (Holly) and Randy (Lori), two daughters; Linda (Ron) Ingalls and Julie (Jeff) Lorensen all of Sioux Falls. Also surviving him are 6 grandchildren and 2 great grandchildren.

He was welcomed into heaven by his wife, Lorraine, parents, Nels and Lucy (Hofman) Brunick, brother, Nels Jr, and grandchild, Brianna Lorensen.

As a long time Coyote enthusiast, memorials may be directed to the Howling Pack at the University of South Dakota.

Duane’s family would like to sincerely thank the Ava’s House team for the devoted and exceptional care they provided.

Duane would want everyone to be healthy and safe so a private ceremony will take place. HansenFuneralHome.com.
To send flowers to the family in memory of Duane Brunick, please visit our flower store.