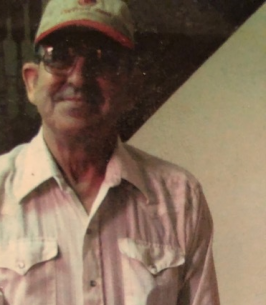 In Memory of Harold Buchmann.
By David A. Bringman.
.
..... "I'm old! The only thing I want to do is not hurt anybody. Don't cause anybody any trouble." Harold said those exact words to me just a couple of years ago. Truth is he lived his life that way. A kind and gentle man. Didn't have a mean bone in his body.
.
Harold spent most of his working life on the maintenance staff at the University of South Dakota in Vermillion. Wound up as head of that unit. He never really quit working. Had a contract for equipment maintenance for several apartment complexes in Vermillion.
.
He made good money and spent it generously. At least twice a year for the last five years he would get together with Denny Stotz and me at my place in the woods. He almost always insisted on buying steaks, the best money could buy, stating he had a special source. He always brought veggies from his garden and made a great potato salad, made with his home-grown potatoes.
.
Harold collected and refurbished old tractors. He had at least 5 of them plus a 1957 Chevy car muscled-up for drag racing. He never did any racing but did love to tinker with that car and his tractors.
.
His demeanor was always cheerful and he had a wonderful quirky infectious laugh. He was easy-going but was also staunchly loyal.
.
When we were teenagers I remember leading him into some really scary situations. I knew he was terrified but he stood right beside me no matter that I was the one responsible for the entire mess. Right beside me, steady as a rock.
.
When I was 15 Harold got me a job on a thrashing gang going from farm to farm. Of course he was a great worker. When the season was over and the owner was paying us off he said, "You boys are the best gang I've ever had." The old man was in his 80s.
.
No one could ever ask for a better friend."
To send flowers to the family in memory of Harold Buchmann, please visit our flower store.