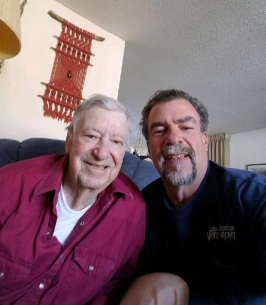 Bud Clay was born in the middle of a dust storm, in rural Beresford on November 11, 1933. He was the youngest child of Cecil and Hazelle (Goodnow) Clay. He attended country school and graduated from Beresford High School. On December 16, 1951 he married ‘his sweetheart’ Nancy Jo Peterson. To this union, four children were born: Cindy, Carla, Bonnie Jo and Benjamin.

Bud and Nancy began their married life and farmed in Beresford. In 1963 they moved their young family to Agar, SD, accepting a position working for Matt Sutton on the Sutton Ranch. Bud enjoyed working cattle and training horses on the ranch. He took great pride in his role with advancing the breeding practices for the ranch. Following a 1969 return to Beresford and a brief time spent farming, Bud and Nancy purchased their home in rural Volin in 1976. There they raised Limousine cattle. Bud held his American Quarter Horse Association (AQHA) judging card and was valued for being a professional show judge with the greatest of integrity.

In 1983 Bud began B & B Service. He ran bulk fuel and tire services out of his gas station. Bud could be counted on for giving away pop and candy to the local kids. He also learned to enjoy a good round of cards, in the station each afternoon. He truly loved the small community of Volin and when he sold B & B Service, he donated a portion of the lot for the Volin Community Café. Each morning Bud would scoop the snow and start the coffee pot, prior to the opening. Bud valued his close friends. Many of these friendships were formed during men’s league at the Glen Ridge Golf Course in Irene.
Most of all, Bud will be dearly missed by his family. He was generous to all and each week purchased a set of lottery tickets for when his was going to ‘hit it big and buy each kid a ranch of their own.’ He enjoyed getting everyone together and was quick to relate how much he loved you.
Bud is survived by wife Nancy Clay, rural Volin, daughters Cindy (John) Baltezore, Beresford, SD, Bonnie Jo Clay, Tioga, TX and son, Ben (Lori) Clay, Oceanside, CA. Also grandchildren and great-grandchildren: Aimee (Grant) Sorensen, Clayton and Cadee Jo Sorensen, Heidi (Brian) Johnson, Brecken JohnDavid and Briggs JosephLee Johnson, Sabrina, Tim & Josh Young-Clay.
Bud was preceded in death by his parents and three siblings, George Clay, Helen (William) Kennedy and Richard Clay and his beloved daughter Carla Jean Clay.
To send flowers to the family in memory of "Bud", please visit our flower store.