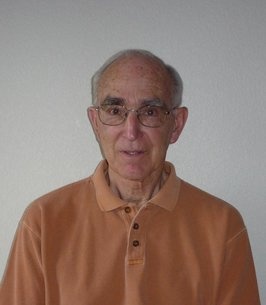 Earl Howard Coker, Jr. was born to Earl H. and Mary Leedy Coker on May 4, 1934 in the small town of Cottonwood, CA and grew up there. Following graduation from nearby Anderson High School, Howard attended the University of California at Davis, where he played JV football and lived in the student-run firehouse. He then entered a doctoral program in chemistry at Oregon State University (OSU). He soon learned that he had been awarded a Fulbright scholarship to Germany, but he was already committed to an assistantship at OSU. His research was in the area of physical chemistry, specifically the solid state physics of crystals.

He had met Marjory George while she was still an undergraduate chemistry major at OSU. They were married on Sept. 4, 1960 in Netarts, OR as both neared the end of graduate school. Howard was soon looking for a college teaching position and was offered an assistant professorship in chemistry at USD. The following September found them pulling a U-Haul trailer into Vermillion with nine days to spare before their first child made his appearance.

Howard began his 45-year career at USD teaching physical chemistry and thermodynamics, served a term as interim department chair, and was appointed Director of the Office of Research in 1983, a position which enriched his academic perspective. After returning to the faculty in 1996, he took a half-time appointment as Director of Compliance, which he held until retirement in 2006. Along the way, he had developed an interest in solutions for critical sedimentation problems in the Missouri River system and co-authored papers on the subject. In 2016, he was honored by the Missouri Sedimentation Action Coalition as a "Friend of the River" for his efforts.

Howard was an avid reader of the Bible and of books dealing with science, religion, and philosophy. Neighbors were familiar with the whine of his chainsaw busily trimming trees and cutting firewood. Another favorite activity was navigating the Vermillion and Missouri rivers in his kayak. A member of Phi Beta Kappa, American Chemical Society, the American Association for the Advancement of Science, and Sigma Xi, he served on several boards including the local Alliance church (C&MA), Crown College, W.H. Over Museum, and most recently the state Board of Directors of the United Church of Christ. He managed the W.H. Over gift shop for a time and participated in USD's Oral History Project.

Howard was respected as a mentor and as a person of integrity, faith, thoughtfulness, and wisdom. He was a good listener, ready to encourage those going through difficult times. He loved his children and grandchildren and took pride in their achievements.

A memorial service will be held on Saturday, January 26, at 7:30 p.m. at the Vermillion United Church of Christ, Congregational. HansenFuneralHome.com.

In lieu of flowers, memorial contributions may be made to the Friends of the W.H. Over Museum, Amnesty International, or the Friends of the Missouri National Recreational River.
To send flowers to the family in memory of Howard, please visit our flower store.