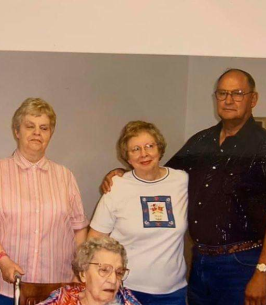 Charles Arthur “Chuck” Denzin Jr., 82, of Wakonda, SD, passed away April 5, 2020 at Avera Sister James Care Center in Yankton. Due to the current health restrictions, a private funeral/burial service will be held for Chuck’s daughters only.
Charles was born February 15, 1938 to Charles and Marie (Ruck) Denzin in Armour, SD. He grew up in Wakonda and graduated from Wakonda High School in 1956.
He married Karen Kline, then later divorced. From this union they had six daughters. He was a lifetime farmer, which includes an award for Outstanding Young Farmer of the year.
Chuck enjoyed hunting with family, playing cards, especially Pinochle and a good game of cribbage. Dad was a member of: Wakonda JC’s, Knights of Columbus, and was a parishioner and board member of the St Patrick’s Catholic Church in Wakonda, SD for several years.
Survivors include six daughters: Linda (Bruce) Anderson, Valorie (Nick) Scherschligt, Pat (Mark) Anderson, Sheri Thelen, Kathy (Jay) Fitzgerald, Gwen (Eric) Schaffer 12 grandchildren and 8 great grandchildren, one sister Marlene Coffman, several nieces and nephews, and special friend Donna Mellem
He was preceded in death by his parents; Charles Sr. and Marie Denzin, sisters; Verla Iverson and Cleo Peterson.
Funeral will be held Tuesday April 7, 2020 at Hansen Funeral Home in Irene SD. In normal times we would have a funeral for everyone to celebrate his life and say our last goodbyes. But times are not normal with COVID-19 which has taken over all our lives! With that in mind along with the safety of everyone’s health and abiding with social distancing, we believe a “Final Goodbye Wave” from the confinement of your own vehicles can be done if you choose.
The daughters’ families will follow Dad to his final resting place in Armour, SD. If anyone wishes to wave goodbye, Dad and his daughters’ families will leave the Hansen Funeral Home around 11:30am and those who follow in will ONLY be allowed to follow to Mayfield store.
In addition, the daughters are requesting no food or flowers. In lieu of flowers, memorial donations can be made to St. Patrick’s Church Renovation Fund in Wakonda, SD.

To send flowers to the family in memory of Charles Arthur "Chuck" Denzin, please visit our flower store.