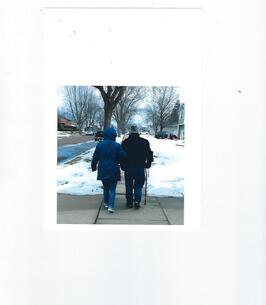 They say you can tell a man by the enemies he makes, but Eugene Joseph Dwyer, who passed away peacefully at his Sioux Falls home on Thursday, September 3, 2020, had no enemies, and that tells you everything about the man. He was quiet, kind, and strong in the real way - never thrusting out his hand, just keeping it quietly ready to grasp and comfort yours, no matter the circumstance, whenever you reached out.

Gene was born to Robert and Cecelia Dixon Dwyer at the family farm near Wakonda, SD on February 15, 1920. He attended Wakonda Public School through the Great Depression and dust bowl years, earning $1.35 for shoveling snow on March 31, 1936, and graduating in 1938. In 1939 he briefly attended Northwest Commerce College in Sioux City, Iowa earning money for school by washing dishes at Bishop's Cafeteria and doing other odd jobs. On January 16, 1940, Gene enlisted in the U.S. Army Air Corps. and was stationed in the Pacific theater. On December 7, 1941, he was "In Charge of Quarters" at Hickam Airfield, Pearl Harbor, Hawaii, and he is believed to have been South Dakota's longest surviving veteran of Pearl Harbor. On September 21, 1945, after five years, eight months, and six days of service, as he by then was often heard to recite, Gene was discharged with the rank of sergeant. He was typically quiet about, but very proud of that service.

During a June 1941 furlough Sergeant Dwyer and Lucille Peterson were married. After his discharge Gene, Lucille, and their young daughter Barbara, born in 1942, moved to Sioux Falls. On March 16, 1946, Gene began working for Wilson Storage and Transfer Co. as a rate clerk. Two more children were added to the family, Tom in 1946 and Cindy in 1952. All three children were raised in "the little white house" on Summit Ave in Sioux Falls. When Wilsons became American Freight System in 1977 Gene and Lucille followed his job to Kansas City where he rose through the ranks to become AFS' general traffic manager, the position from which he retired in 1985. After moving back to Sioux Falls Gene quickly discovered retirement did not agree with him. From 1985-88 he went back to work with Midwest Coast Transport. Then, in 1988, Gene took up a third career, working as a Constituent Service Representative for Senator Tom Daschle. Gene assisted veterans and acted as a liaison to the Veterans Administration from 1988 until 2005, tasks he found most rewarding. From his final retirement at age 85 until his passing Gene kept company with his wife and his daughter, Cindy, who assisted he and Lucille in their home for the last seven years, was visited frequently there by his grandchildren and their families, and each day faithfully displayed the American flag flown over the United States Capitol and presented to him by Senator Tim Johnson. On February 15, of this year Gene and some 100 others celebrated his 100th birthday at which time Gene was embarrassed, but we are certain also quietly pleased, to have that date (by request of his much loved fellow members of Gingrich-Dixon Post #13) named Sergeant Eugene Dwyer Day by the Governor and Secretary of State of South Dakota, to have a letter of congratulations from Senator Tom Daschle read, and to welcome his friends Senator Tim and Barbara Johnson to his party.

Gene left us hoping the message of his life, that quiet and caring, not noisy insistence, are what matter, will be heeded by the country he so loved. That message, lived with unbelievable fidelity for over 100 years, is the reason Gene was without enemies, and is why he will be so very missed by his family, his friends, and his nation.
A family graveside service for Gene will be held at the Union Cemetery in Wakonda, SD at 2:00 PM on Wednesday, September 9, 2020. The family requests that masks be worn, and social distancing observed and that donations in Gene's name be made to the donor’s favorite charity or to the Sanford or Avera hospice programs.

To send flowers to the family in memory of Eugene Joseph Dwyer, please visit our flower store.

**The family requests that masks be worn, and social distancing observed.