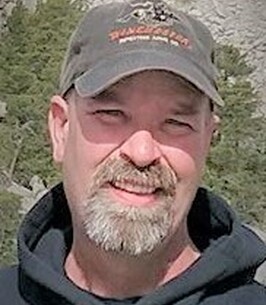 Doug Ellison died July 9, 2020 at his home in Wakonda, SD. He had recently turned 51 years old.
Doug was born July 4, 1969, in Vermillion, SD. For his parents and 2 ½ year old sister he was a handful but lots of fun and unusually independent. As he grew older, his curiosity and love of life were apparent to all who met him. He loved a good story and could often be found telling one.
He attended Vermillion schools and, given his love of cars, went on to trade school in Sheldon, IA. He stayed beyond graduation, working at the grain elevator and with a local electrician. His greater joy there, however, was meeting and marrying Nancy Auchstetter and starting a family with her. They enjoyed the support of both families as they established their home and began raising their two boys, Mitch and Tim. New fatherhood brought out some of his tenderest moments including taking his new sons door to door to proudly introduce them to the neighbors.
Throughout his life he enjoyed the outdoors, even more so if a camper or engine were involved. It started with dirt bikes and go-karts when he was little and grew to encompass boats, snowmobiles, and motorcycles.
He fulfilled a lifelong dream of moving home to work the family farm and was happy for his boys to have that experience. He later went out on his own and with his second wife Terri enjoyed creative projects and making plans to remodel the house in which they lived in Wakonda.
Doug is survived by his sons Mitch (wife Jackie, son Tucker) and Tim; parents Erlin and Marilyn Ellison; sister Gwen Ellison; and Terri Johnson.
Due to Covid-19, Doug’s memorial service will be held at a later time.
To send flowers to the family in memory of Douglas Ellison, please visit our flower store.