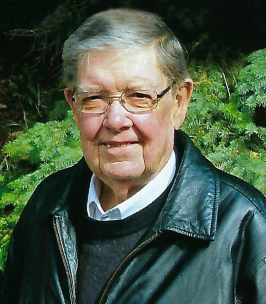 Memorial services will be 11:00am, Thursday, December 10, 2020 at Peace Lutheran Church (5509 W 41st St, Sioux Falls, SD) Visitation will begin one hour prior to the service. Face coverings will be required. Join the service online at peacelutheran.com/live
In lieu of flowers the family requests memorials be directed to the Old Vangen Cemetery Fund. (300 W. 3rd Street Mission Hill, SD 57046)
Roger Dean Hanson was born on November 8th, 1937, in Mission Hill, South Dakota, to Floyd and Delma Hanson. He attended Yankton High School, graduating in 1955.

After graduating he attended Yankton College and Augustana College in Sioux Falls, SD. Following college, he married Janet Koobs on June 6th, 1958, and from that union they had two sons, Brian and Brad Hanson. From there, he joined the US Army and served in Leavenworth, KS. He went on to work as a farm equipment salesman at M&W Gear Co. for over 30 years. On January 20, 1978 he married Sharon Weber and they would have been married for 42 years. After working as a salesman for 30 years he went on to become an independent salesman selling scooters, lawn mowers as well as kiddie rides that were placed in various malls. Roger had the gift of gabbing along with his talents of cooking and baking. He loved to share his baked goods with others.

He took pride in the farm he was raised on in Mission Hill. Each year he would decorate and hang lights for his mother over the holidays.

He was preceded in death by his parents Floyd and Delma Hanson and one great-grandson Theo Bedinger.

The family of Roger Hanson thanks you for your support, prayers, and presence today.

To send flowers to the family in memory of Roger D. Hanson, please visit our flower store.