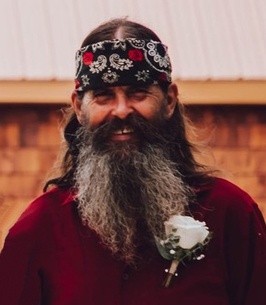 Kenton Kaye Jensen “Spud”, 60 of Irene, died unexpectedly at his residence in Irene, SD on November 3, 2021.
Spud was born on January 26th, 1961, in Vermillion, SD to Dean and Faye Jensen. He grew up and attended Irene School in Irene, SD. He married Deena Andersen (Walraven) and in 1980 they had their daughter, Amy Jensen. While living in Wyoming, he worked in oil fields with his brothers and worked as a mail processor at the post office in Gillette. In 1993, he accepted a transfer to the post office in Sioux Falls and he moved to Valley Springs, SD. While living in Valley Springs, he enjoyed golfing, poker runs, and watching his daughter, Amy, run track. After leaving the post office, he became a partner with his siblings in his two businesses, USA Siding and Smooth Move, which he worked for the past 22 years.
Riding motorcycle, attending concerts, golfing and disc golf, hiking, Jeopardy, and anything that involved a competition were some of his favorite things to do. He especially enjoyed doing his favorite things with his family and friends. He often used corny jokes and sarcasm to “leaf” a lasting impression with anyone he met.
He leaves behind his dreaded cigarette roller, Mt. Dew, Budweiser, and most importantly, his family, which includes; his mother, Faye Jensen, children, Amy Jensen, James Jensen, Roxanna Fowler, siblings, Donlyn Jensen, Lyndon Jensen, and Deanna Huether, grandchildren, Lexie (Landon) Larsen and Dieken Bahm, nieces, Timarie (Alberto) Javier, Lacey Jensen, Jasmine Jensen, Robin (Jason) Masteller, RaeLynn (John) Schmidt, Kari (Jeremy) Nelson, and Kelly (Adam) Christ, nephews, Tommy (Mindy) Huether, Timmy Jensen, and Kyle (Katie) Huether and many great nieces and nephews.
He is proceeded in death by his grandparents, nephew, Joe McManus, and his beloved father, Dean Jensen.

Answer: Who is Spud?
To send flowers to the family in memory of Kenton Kaye "Spud" Jensen, please visit our flower store.