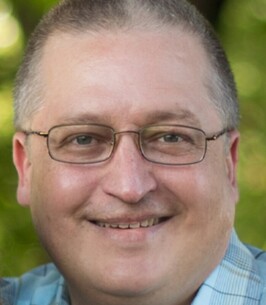 Jeremy was born May 2, 1973, to Jerald and Lynette (Williams) Johnson in Vermillion, SD. He graduated from Vermillion High School in 1991. He received his bachelor’s degree from the University of South Dakota with a double major in Psychology and Criminal Justice. He then attended Central Michigan University where he received his master’s degree and PhD in Clinical Psychology.

In 1995 Jeremy married Heather Johnson in Vermillion. After he graduated from USD, they moved to Mount Pleasant, MI, where Jeremy completed his education. After that he did a year-long internship with the VA. They then moved to Grand Rapids, MI, where Jeremy worked with head injury clients. After that came a move to Peoria, IL, where Jeremy opened his private practice as a Clinical Psychologist. In 2014 they moved back to South Dakota where Jeremy and Heather started Emerald Psychological Services in Sioux Falls working with many private clients and veterans suffering from PTSD. Jeremy was leaving home to meet with a client when he had his heart attack.

Jeremy taught himself woodworking and made remarkable items. He was very creative and designed his own projects. Jeremy was always a Star Wars fan. He enjoyed taking his girls fishing and loved the Dallas Cowboys. His favorite player was Emmitt Smith, number 22. And Jeremy passed away on the 22nd.

Jeremy leaves behind his wife Heather and his daughters Madelyn (Maddy) and Samantha (Sam). Also surviving are his parents Lynette (Neil) Melby of Vermillion and Jerry (Nancy) Johnson of Sioux Falls. Grateful for having shared his life are his brother and sisters Thad Johnson, Kally Johnson, Kenna (Kevin) Kennedy and Elly (Bennet) Johnson. Uncle Jeremy also leaves his niece and nephews Ashlyn and Hendrix Kennedy and Beau and Emmett Johnson.

Visitation will be 5:00 – 7:00 on Friday, March 25, with the family present. Funeral service will be at 1:00 Saturday, March 26, all at the Hansen Funeral Home, 1120 E Main St., Vermillion. In lieu of flowers, memorials preferred to family.
To send flowers to the family in memory of Jeremy Johnson, please visit our flower store.