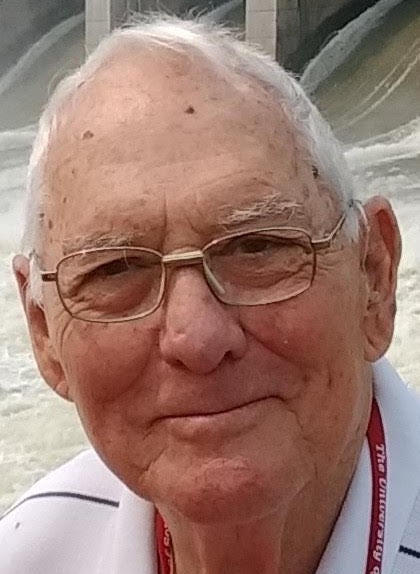 Ken was born on January 24, 1932, to George and Beatrice Beringer in Tyndall SD. He went to in Tyndall and attended K State for one year and then graduated from Southern State Teachers College. He served in the Marines in the summer college program. He married JoAnne (Baker) on May 24, 1952. Ken taught in Winner, Salem, and Lennox before coming to Vermillion in 1963. Ken taught, coached, and eventually became the first business manager for the Vermillion Public School system. He also had an illustrious career in officiating football and basketball for 35 years. His love of baseball had him coaching American Legion baseball for over 20 years, where he got to coach his three sons: Kenny Joe, Jeff, and Jon. Ken was a big Los Angeles Dodger fan and many family vacations brought them to Dodgers games across the country. Ken’s love for sports had him attending many USD and VHS athletic events. Ken and JoAnne were both inducted into the Hall of Fame for both the University of South Dakota and Vermillion High School. His retirement years had him enjoying the company of his wife JoAnne, his children, grandchildren, and great-grandchildren.

Ken was preceded in death by his parents, his loving wife JoAnne of almost 67 years, his son Kenneth Joseph, his brothers George, John, and Douglas, and his sister Mary Ellen.

Ken was grateful for sharing his life with his wife JoAnne, his children Kenneth Joseph (Joan), Jeff (Cindy), and Jon (Deb), Grandchildren and great-grandchildren. Ken is survived by his brother Richard (friend Janet).

In Lieu of flowers the family is requesting memorial donations to be directed to the University Of South Dakota athletic department. Cards and condolences can be sent to: Jeff Beringer at 2505 Capital Street #202, Yankton, SD 57078.

To send flowers to the family in memory of Kenneth John Beringer, please visit our flower store.

Rosary will begin at 7:00PM