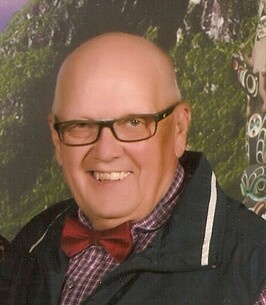 George F. Kjeldseth of Irene, SD, passed away on Friday, February 15, 2019 after a brief, but courageous battle with glioblastoma.
George was born on July 21, 1946 in Trenton, New Jersey, to Milburn and Lois (Hoxeng) Kjeldseth of Volin, SD. He spent his childhood on the family farm, training horses, showing livestock in 4-H, and playing multiple sports. He graduated from Wakonda High School in 1964 and later from Southern State College in Springfield in 1969.
He married his high school sweetheart, Loann Heller, on August 31, 1968; together they taught and coached at Westfield, Iowa for 4 years before returning home to work on the family farm that held his heart for the rest of his life.
George was active in the Irene and Wakonda communities, singing and performing in plays, musicals and cantatas; watching area sports; playing fast-pitch softball, slow-pitch softball and fat-man basketball and coaching his daughter’s teams. He served on the Irene School Board and Calvary Lutheran Church Council. He was involved in 4-H clubs and Augustana Boosters, but his favorite past time was catching all the news at Pump N Stuff, the Elevator or any livestock sale barn or show. George was famous for knowing the best places to stop to eat – these were eventually dubbed “George stops” by friends and family.
He is survived by his wife, Loann; 3 daughters: Megan (Matt) Gauer of Phoenix, AZ; Jenni (Darren) Miller of So. Sioux City, NE; Jorcee (Travis) Hansen of Madison Lake, MN; eleven grandchildren: Allyssa & Addyson Gauer; Justin, Cassandra, Brandon, Andrew & Tanner Miller; Irie, Brevin, Keldee & Quillan Hansen.
He was preceded in death by his parents.
The family asks that memorials be directed to Calvary Lutheran Church in Irene or Hillcrest Cemetery Association.
To send flowers to the family in memory of George F Kjeldseth, please visit our flower store.

A prayer service will begin at 7:00pm.