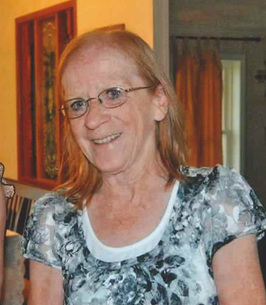 Marjorie Helen (Brown) Kjose, 71, of Vermillion, SD passed away Sunday, January 17th at her home after a long battle with cancer.
Marjorie Brown was born July 30, 1949 in Vermillion to Densel and Lorraine (Kubik) Brown. She graduated from Vermillion High School and married William Kjose on October 17th, 1969 in Vermillion. They had two children, Brad and Wendy.
Marjorie has spent the last 23 years in Vermillion with her significant other Robert “Bob” Richardson. She enjoyed camping, fishing, sewing, and spending time with her family especially her great grandchildren.
She is survived by her significant other Bob Richardson, her son Brad (Kathy) Kjose of Alcester, SD, daughter Wendy Harkness of Vermillion, grandchildren; Amber, Heidi, Tyler, Taylor and Halley, and four great grandchildren; Audrey, Jacob, Ryan and Elliot. She is also survived by her siblings; Doug (Millie) Brown, Richard “Dick” (Deb) Brown and Marie Ouellette all of Vermillion, Dan (Linda) Brown of Volin, SD Linda “Kitty” (Mike) Holmes and Marilyn Jensen all of Elk Point, SD.
She was preceded in death by her parents, a brother Donald “Tom” Brown and a son in law James Harkness.
To send flowers to the family in memory of Marjorie Kjose, please visit our flower store.