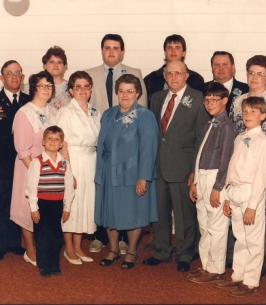 Jeffrey Lewis Knutson, age 49 of Irene, SD, died on Tuesday, September 17, 2019 after a seven-year battle with liver disease.
Jeffrey was born to Kermit and Arnetta Knutson on February 28, 1970 at Yankton, SD. Jeffrey attended Kennedy Public School for 11 years and graduated from Storm Lake High School, Storm Lake, Iowa in 1989.
Jeffrey worked as a crane operator at Bargloff & Co., Freisen of Iowa, Norm’s Livestock and a private contractor with his brother and dad for many years. With his jobs, Jeffrey traveled throughout the United States and loved to vacation in the tropics. His last ventures were to deliver campers throughout the United States with his brother, Paul, and drive truck for his cousin, Mike Lovejoy.
Jeffrey loved to spend time with his family and friends. He especially loved to watch Gunsmoke and the Minnesota Vikings.
Jeffrey was loved by everyone because he had a heart of gold and he was a Christian. Jeffrey was survived by his parents: Kermit and Arnetta Knutson of Irene, SD: (sister) Debra and Bill Horn of Yankton, SD; their sons Mathew and Ashle Horn of Viborg, SD; Casey and Katie Horn (children) Macen, Abel and Rose of Yankton, SD; (brother) Paul and Robin Knutson of Storm Lake, Iowa; their kids Logan Borchardt of Alta, Iowa; Jordyn and Brandon Iehl (child) Julian of Storm Lake, Iowa; Aunts and Uncles: Gary and Susan Drugley of Kentucky; Brenda Drugley of Yankton, SD; Darlene Lovejoy of Wakonda, SD; Arlene Zoeller of Lennox, SD; Bonnie and Frank Seitzinger of Dakota Dune, SD; Micy and Cliff Highstreet of Hurley, SD and many cousins and extended family.
Jeffrey was preceded in death by his grandparents; Arnold and Ruth Drugley of Irene, SD; Elwyn Bud and Elvera Knutson of Centerville, SD; and aunt Ginny Christensen.
To send flowers to the family in memory of Jeffrey Lewis Knutson, please visit our flower store.

A prayer service will begin at 7:00PM