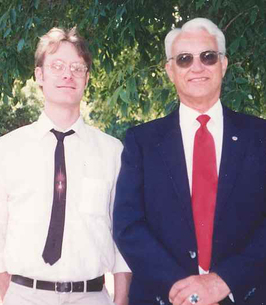 Robert Leroy Lansing passed away at his home under hospice care on April 18, 2019 in Vermillion. He was 94.
Robert was born 2-28-25 in Cleveland, OH, son of Edna (Bonness) Lansing and Floyd Elliot Lansing. Robert lived in Madison, WI from 1927 until 1989 except for his time of service as a sonar man in the United States Navy during World War II and a period of 4 years when he lived in Eau Claire, WI. Bob was employed by American Family Insurance for 35 years in the Claims Department, primarily as a Claims Examiner. Upon retirement, he moved with his wife Lucille to Tucson, AZ (1989-2008) and then to Vermillion (2008-2019).
Bob graduated from East High in Madison in 1942, and from the University of Wisconsin (Madison) in 1949. He married Lucille (Bryant) on June 18th, 1949. They had two children, Louise (Lansing) Quevillon and Brian Robert Lansing (deceased, 2014).
Bob loved nature. Bob enjoyed growing houseplants, tending his garden, and birdwatching, as well as celebrating all living creatures.
He is survived by his wife Lucille Lansing, his daughter Louise Quevillon, son-in-law Randal Quevillon, grandsons Joshua and Paul (all of Vermillion, SD), and granddaughter Heather Quevillon (Buffalo, MN), his sister Phyllis (Lansing) Brace (Yountville, CA), and his niece Nancy Chase. He was preceded in death by his parents and his son, Brian Lansing.
The family wishes to thank the Hospice Asera Care staff for their excellent help and support for Bob and his family.
Memorials for Robert can be sent to the Main Street Center, 320 W. Main St., Vermillion, SD 57069.
To send flowers to the family in memory of Robert LeRoy Lansing, please visit our flower store.