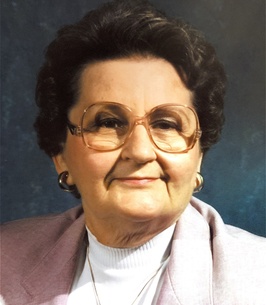 Gladys Mednansky Lien, age 91, Volin, S.D., died on March 26, 2020 at the Pioneer Memorial Nursing Home in Viborg, SD.
Gladys Mednansky was born on May 11, 1928, to Mike and Emma Mednansky. She was one of 14 children. The family lived in Cottonwood and Philip before moving to a homestead north of Kadoka. She completed 12 years of schooling at Kadoka School, and graduated in 1948.
She moved to Yankton, SD after graduation, where she worked as a medical secretary at the State Hospital. She was united in marriage to Orvis J. Lien on June 16, 1950. To this union one son and two daughters were born.
In addition to raising their three children, Gladys was an active partner in managing the family farm. She was also involved with Ladies’ Aid, served on the church council and was a Sunday school teacher. She also worked for many years at Gurney’s in Yankton. She was an avid gardener, maintaining a large vegetable garden for many years, from which she fed not only the family but also many neighbors through her canned goods and also her famous apple pies! Her beautiful flowers were well known, and she loved to share them with family, neighbors, and the church.
Grateful for sharing her life are her son, David, her daughter Julie Mellem and her husband Paul, Volin; her daughter Barb Hart and her husband Terry, Jacksonville FL; grandchildren, Eric (Sarah) Mellem; Kevin Mellem, Ashley Reints (Devin) , and Brianna (Lucki) Lien-Onsy; great-grandchildren, Megan, Kaitlynn, Jefferey and Brooklynn Mellem; Aria Reints; Tayis, Indy and Iva Lien-Onsey; and a very large number of nieces, nephews, and friends.
She was preceded in death by her parents, Emma and Michael Mednansky; husband, Orvis Lien; seven brothers: Michael as an infant, Frank, John, Clarence, Arthur. Ervin (Bud) and Edward Mednansky; six sisters: Clara Pearson, Albina Mowery, Helen Boyd, Alice Mednansky as a child, and Evelyn and Elizabeth Mednansky as infants. Gladys was the last surviving child of her family.
To send flowers to the family in memory of Gladys M Lien (Mednansky), please visit our flower store.