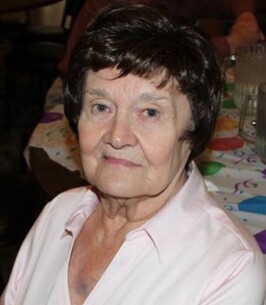 She was baptized at St. George Catholic Church in Scotland, SD. Lorraine graduated from Scotland High School in 1952.

Lorraine married Edward Hessman in Scotland on November 18th, 1952. They were blessed with eight children. She enjoyed working on the farm raising hundreds of chickens, ducks, geese and tending to her garden. She worked at Gurney Seed & Nursery, Sunset Manor in Irene and Heritage Manor. Lorraine was one of the first employees at Wakonda Heritage Manor and served as a cook for many years.

After Edward’s passing in 1979, Lorraine was united in marriage with Frank Martz on January 24th, 1986.

She was a member of St. Patrick’s Catholic Church. Frank and Lorraine enjoyed gardening and donated much of their produce to the local food bank, Heritage Manor, family and friends. Lorraine and Frank enjoyed going on road trips, especially to the Martz family re-unions every August.

Special thanks and gratitude for the compassionate care given to Lorraine by Wakonda Heritage Manor staff. You truly are angels on earth.

In lieu of flowers, memorials can be made to St. Patrick’s Catholic Church or Wakonda Heritage Manor Avera.

Due to the current health concerns, a private family service will be held.
To send flowers to the family in memory of Lorraine Martz, please visit our flower store.