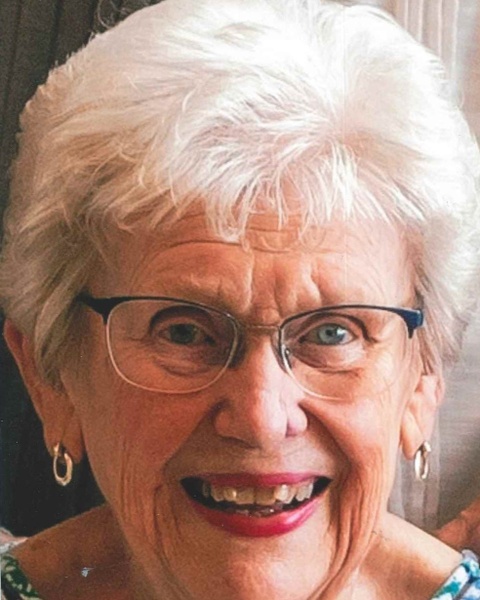 Maxine Frances Darling Rogers was born in Lyons Nebraska on May 29, 1934. She was the youngest child of Paul and Viola (Schmiedeskamp) Darling. She attended and graduated from Lyons Schools in 1952. After graduation Maxine attended one year at nursing school in Omaha. Maxine grew up helping her mother maintain a maternity hospital in their home caring for new mothers and newborns and as a result of that experience she became the family expert on baby care.

On June 28, 1953, she married Wayne Rogers at the Presbyterian church in Lyons NE.  Their first home was a trailer on the farm and the town girl quickly learned how to be farmer’s wife. While on the farm she raised and dressed chickens, maintained a large garden and she absolutely loved to cook, especially large holiday meals.

Her passion for cooking stayed part of her until her illness prevented it.

She was a telephone operator for several years and worked at an outreach agency. In 1970 the family left the farm and moved to Ida Grove Iowa. She held several jobs including, setting type at the Pioneer Record Newspaper for three years, serving as the secretary for the Public Health Nurse from 1974-1977 and in the Ida County Auditor’s office retiring in 2000 as the Auditor of Ida County. She also was in many organizations including Job’s Daughters, Eastern Star, was a District Officer for United Presbyterian Women, taught Sunday School and Vacation Bible School. She was an avid volunteer at Westminster Presbyterian Church especially for many omelet brunches and the annual Cookie, Candy, Craft sales.

Her lifelong love of sports started at an early age with her love of the Nebraska Cornhuskers. Upon moving to Vermillion in 2009 she became a devoted Coyote fan, rarely missing any volleyball, football, men’s, or women’s basketball games. She became a bit of a team gramma and taught a few of the women’s basketball teams to knit.

Wayne and Max loved the mountains of Colorado and made many trips west. They also celebrated 50 years of marriage by going on an Alaskan cruise. Some other special memories include, celebrating her 80th birthday, taking her daughters for a long weekend to Vegas over super bowl Sunday in 2014, visiting the Cayman Islands and Florida. We also had a tradition of a girls Christmas Shopping week that began in 1988, she never missed a year through 2021. As sisters we will have the best of the best memories of those weeks!

She was involved in ESA, was a library volunteer, a food pantry volunteer, took many Ollie classes, and was in knitting, Mah Jong, Carbles, and dominoes groups. We were all amazed at her social calendar!

Max followed her grandchildren in all their activities and was their biggest fan. She was a lover of social media keeping up on Facebook, Instagram, and twitter, also streaming events that she couldn’t attend. In addition to her vast love of her family, she loved Netflix, Popcorn, Cross-Stitch, Appliqué, and seasonal decor. She loved her home in Vermillion and made many wonderful friends. She was a true Vermillionaire! The family will be eternally grateful for all those that watched over her!

Maxine was preceded in death by her husband Wayne in 2012, her parents, beloved siblings Don Darling, Chuck Darling and Pauline, (Pat) Martin.

In remembrance of her love of sweets you are invited to a time of fellowship with the family back at the church for sweets following the committal service.

Memorials may be directed to the Special Olympics or the USD Howling Pack foundation.

To send flowers to the family in memory of Maxine Rogers, please visit our flower store.