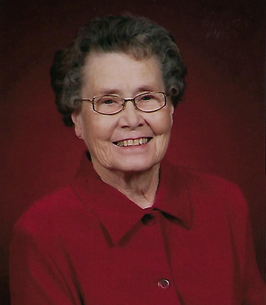 She was born December 7, 1930 to Helge and Florence (Hall) Halvorson northwest of Centerville, SD. Miriam was baptized and confirmed at Scandia Lutheran Church, Centerville, SD. She graduated from Irene High School in 1948, attended SDSU and General Beadle College earning a teaching degree. She taught 6th grade in Dell Rapids, SD.

Miriam married John N Nelson on January 20, 1951 at the 1st Lutheran Church in Worthington, MN. They farmed outside of Irene, SD for many years.

She counted it a privilege to serve on the Calvary Council, was a member of the women’s group, was a Sunday School teacher, confirmation teacher, and attended Via de Cristo weekends. Miriam was also a member of the Irene PTA and served on the Sunset Manor Board. She had a passion for caring for children. Miriam retired at the Pioneer Villa, Viborg, SD.

She was preceded in death by her parents, husband, brothers Harold and Robert, sisters Olava and Helen, and grandson, Joshua Johnson.

Visitation will be from 9 to 10 a.m., with the funeral service beginning at 10 a.m. on Saturday, January 23, 2021 at the Calvary Lutheran Church in Irene, SD. Burial will follow in Riverview Cemetery, Centerville, SD.

*Masks will be required to attend*

*Masks will be required to attend*