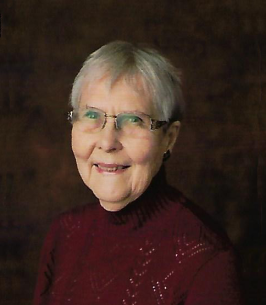 Verna Carol (Vognild) Nelson age 89 of Wakonda passed away August 5, 2020 at Pioneer Memorial Hospital in Viborg, SD.
Verna was born December 18, 1930 on a farm near Westerville, Clay County South Dakota. She was the oldest of 5 children born to George and Alice (Thompson) Vognild. She was baptized and confirmed in the Lutheran Faith. She received her elementary education at the Westerville #39 and Colfax #23 schools. She graduated from Wakonda High School in 1948, valedictorian of her class.
She worked at the Security State Bank in Wakonda. On September 8, 1950 at First Lutheran Church in Wakonda she married Ellwyn Nelson. She was planning on having four daughters. They lived in Killeen, Texas and Lawton, Oklahoma, when Ellwyn was in the army. It was while living in Lawton their first son was born. When Ellwyn was sent to Korea, she and infant son returned to Wakonda.
After Ellwyn received his discharge they resided on the farm northeast of Wakonda until they moved to Wakonda in 1977.
In the 1960’s and 70’s she had a thriving home-based business of sewing for others. Verna was active in the BMJ Extension Club and held many offices in the church, both on the church council and WELCA. She was a teacher aide/secretary at the Wakonda School for 19 years. In 1994 Verna and Ellwyn hosted a French foreign exchange student, Nelly Michoud and traveled to Europe 3 times to visit with her and her family. She became a member of the family and converted to 100% Norwegian.
Surviving are her three sons and daughters-in-law. Dale and Carolyn (Kopping) Nelson of Wakonda, Keith and Elizabeth (Clemente) Nelson, Exton, PA, Paul and Kristy (Ward) Nelson, Custer, SD and Nelly and Volker (Michoud) Diekmann and family.
Verna had 6 grandchildren: Angie (Jeremy) Sayler Viborg, Todd and Cathy (Troutner) Nelson of Vermillion, Carter Nelson, Denver, CO, Chandler Nelson, Houston, TX, Dakota Nelson, Seattle WA, and Derek Nelson, Forest Grove, OR, 5 great-grandchildren: Cassidy, Devin, and Addison Sayler and Tessa and Brynn Nelson. Also surviving are her sister Marlene (Larry) Erickson, Centerville, and brother Gene (Shirley) Vognild of Sioux Falls, SD, sister-in-law Carol Vognild, Wakonda and brother-in-law Fred Ayers of Westlake, Ohio and several nieces and nephews and many close friends.
She was preceded in death by her parents, her husband Ellwyn in 1999, infant grandson Taylor, sister Norma Ayers, brother Darrell Vognild, nieces Emily Erickson and Lynn Ayers Russell.
In lieu of flowers, the family requests donations be directed to the Wakonda Fire and Rescue, Union Cemetery Association, or the United Methodist Church in Wakonda.
To send flowers to the family in memory of Verna Carol Nelson (Vognild), please visit our flower store.