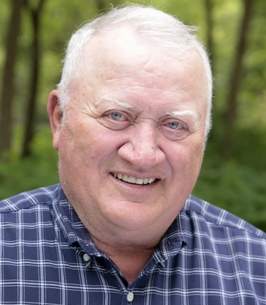 Franklin F. Orr, 76, of Vermillion, SD passed away Sunday, January 5 at his home with family by his side.
Frank was born November 18, 1943 to Roland (Bud) and Eileen Orr at Dakota Hospital in Vermillion. He attended Spring Hill Country School and graduated from Wakonda High School in May 1962. He enjoyed playing football and running track. He was High School Homecoming King in 1961.
Frank married Gwen Lee Dowd, his high school sweetheart, on November 3, 1963. He was a life-long farmer in the Meckling area and raised many crops, hay, cattle, pigs, and sheep. He enjoyed farming and working alongside his father Bud, brother Ronnie, and son Justin.
He enjoyed hunting, fishing, boating, and family gatherings. He was a member of Pleasant Valley Lutheran Church. Frank was on the board of directors of both of the SDSU Experiment Farm and the Cattlemen’s Association. He had the honor of being named Clay County’s Outstanding Young Farmer in 1977.
He is survived by his wife of 56 years, Gwen, and their four children- Jean (Brad) Hansen and family: Sarah, Brett, Brian (Katie) and their son Granger; Brenda (Todd) Townsend and family: Tim (Trish), Tessa, and Trevor Tigert; Melissa (David) Orr-Beverly and children Gage and Jace Beverly; Justin (Amy) Orr and sons Frankie, Henry, Eddie, and Vinnie Orr; his sisters: Sally (Ralph) Westergaard and Mary Ellen (Todd) Brevik; sister-in-law Beverly Orr; brothers-in-law Dennis (Ivy) Dowd and David (Tere) Dowd; sister-in-law Kathy (Perry) Krush; and many nieces, nephews, cousins, and friends.
Frank is preceded in death by his parents, Roland (Bud) and Eileen Orr, brother Ronnie Orr, and in-laws Edward and Darlene Dowd.
The family wishes to thank the doctors, nurses, home health team, family, and friends for their care and support.
To send flowers to the family in memory of Frank Orr, please visit our flower store.