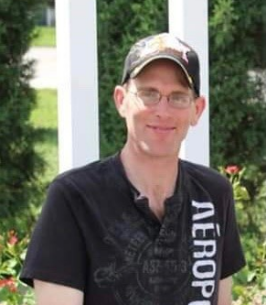 Ross Thomas Orr died peacefully at his home on March 18th, 2021.
A Celebration of Life will be held 10:00am, Saturday, March 27, 2021 at the Calvary Lutheran Church in Irene, SD. Burial will follow in the Pleasant Valley Cemetery in Westerville, SD. Visitation will begin one hour prior to services. The service will be livestreamed at www.facebook.com/hansenfuneral
Ross was born to Burton and Joyce (Nelson) Orr on June 13th, 1975 in Viborg SD. He graduated from Wakonda high school in 1993. Ross then went on to get his bachelor’s degree at SDSU in Brookings SD. After graduating from SDSU he later went to college at lake Area tech in Watertown SD to get his associates degree in robotics. Once he graduated, he went on to work for TransCanada. In 1998 he married the love of his life Susan (Williams) Orr on August 15th. To this union they had two wonderful children Parker Theodore Orr and Hope Evelyn Orr.
Ross had his first aneurysm on March 27th, 2010. His family then moved to Wakonda in 2012.
He was preceded in death by his father and mother Burton and Joyce Orr his grandparents Burdette and Marion Orr and J Maurice Nelson and Evelyn Nelson.
Ross is survived by his wife Susan of Wakonda, his son Parker of Vermilion and his daughter Hope of Wakonda, His mother in law Donna Williams and the late (Edwin Hall) of Watertown SD, his father in law Michael Williams and (Julie Williams) of Watertown SD his sister Valerie Berry and (Tyler) of Lincoln Nebraska, his oldest sister Jacque Brouwer and (Jakob) of Texel, in the Netherlands, His sister in law Stacy Lindner and (Blaine) of Watertown, his brother in law Michael Williams Jr and (Linda) of Rapid City SD and by many nieces, nephews, aunts, uncles, and cousins.
Honorary Pallbearers are Mike Sweeney Jesse Nelson, Casey Hansen, Dorey Hansen, Mike Williams, Dan Larson, Farmer Dave Johnson, and Corey Buck.
To send flowers to the family in memory of Ross Thomas Orr, please visit our flower store.