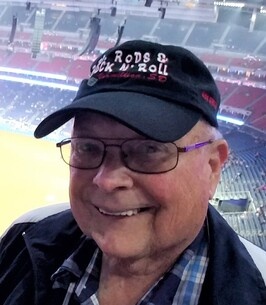 Loren Allen Ouellette of Burbank, SD, passed away peacefully on November 12, 2020, at Sanford Hospital in Sioux Falls. He was the oldest child born to E.A. and Grace (Olson) Ouellette on August 9, 1936, at home in rural Elk Point. The family later moved to the rural Vermillion area.

Loren graduated from Vermillion High School in 1954. He worked at Farmer’s Elevator, Carter's Texaco, Flasco & Wilson Trailer (Sioux City, IA), and Industrial Engineering & Vapor Heating until he enlisted in the U.S. Army in 1959. He was a proud veteran and served as a Special Weapons Technician in the U.S. 7th Army in Büdingen, Germany.

Upon his honorable discharge in 1962, Loren returned to the Vermillion area. In 1963 he married Luann Scott (later divorced) and they had one daughter, Lynn. For many years Loren worked as a welder at Electro-Magic while helping his dad farm the family land east of Vermillion.

Loren attended Sioux Empire College in Hawarden, IA, graduating with honors in 1975 with an Associate Arts Degree in Agricultural Business. Loren continued farming until 2010 and was still living on the farm at the time of his death.

Loren enjoyed working with his hands and bringing ideas to life. He used his welding talent to not only repair farm machinery, but also to build custom BBQ grills. He and his friend Darrell Jensen of Wakonda served thousands of people across southeastern SD in their lifetimes. Loren eventually went on to become a Kansas City Barbeque Society certified barbeque judge and certified table captain.

Loren loved being outdoors, spending countless summers boating and fishing on the Vermillion and Missouri Rivers. Over the years he also enjoyed hunting, snowmobiling, driving in demolition derbies, restoring John Deere tractors, flying his airplane Veronica, camping in his RV, and traveling thousands of miles on his Harley Trike across the Midwest and south Texas.

Loren liked traveling around the U.S, and he especially enjoyed attending reunions with his Army buddies. He also visited Lynn & her husband Matt wherever they were living at the time, including Europe. He particularly loved seeing how much Paris and Munich had changed in the 50 years since he had been stationed overseas.

Loren lived life to the fullest, and he wouldn’t have wanted to live any other way. He laughed often, told great stories, and made friends easily everywhere he went. He will be greatly missed by many.

Loren was a member and past president of the Fraternal Order of Eagles #2421 in Vermillion. He was also a member of St. Agnes Catholic Church, the American Legion Post #13 in Wakonda, and A.B.A.T.E. of South Dakota.

He was preceded in death by his parents and long-time companion Jan Dunham, as well as many aunts, uncles, and cousins. Loren will be buried with Military Honors in St. Agnes Calvary Cemetery in Vermillion during a private ceremony. A celebration of his life will be planned at a later date.

Loren’s family thanks the Sanford Medical staff in Vermillion and Sioux Falls for the great comfort and care they provided during his final days. Memorials may be given to the Eagles or a charity of choice.

To send flowers to the family in memory of Loren Ouellette, please visit our flower store.