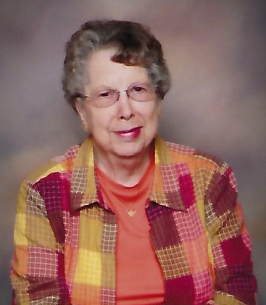 Alberta M. Pearson, age 86, of Viborg, passed away Sunday, November 15, 2020 at Pioneer Memorial Nursing Home in Viborg.
Alberta was born on May 31, 1934 to Casper and Olive Jensen in rural Wakonda, South Dakota. She graduated from Wakonda High School in1952. She attended Madison General Beadle College, and later taught at West Prairie Country School and several others. She also worked at the Pleasant Valley and First Lutheran Churches as part time secretary for 15 years, and serial librarian at Lomen Health Sciences Library at the University of South Dakota from 1985 until her retirement on June 30, 2000.
She enjoyed traveling with her sisters to Norway, England, and Disneyland in California also playing cards.
Alberta is survived by one sister Maxine Cook of Lincoln, California, and many nieces, nephews, and cousins.
She was preceded in death by her parents, her husband Lyle Pearson, her brother Howard, and sister-in-law Deloris Jensen; her sister Evangeline Jensen, one brother-in-law, Robert D. Cook and niece Dianne Lynn Jensen. In lieu of flowers, the family asks that memorials be directed to your favorite charity or the Union Cemetery Mowing Account at First Premier Bank, P.O. Box 326 Wakonda, SD 57073.
To send flowers to the family in memory of Alberta M. Pearson (Jensen), please visit our flower store.

***Masks will be required. Please practice social distancing. For live stream of the service visit https://www.facebook.com/oursaviorsviborg/live/