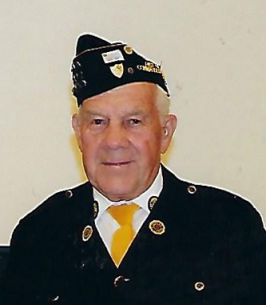 Kenneth W. Peterson of Wakonda, SD passed away at the age of 93 on Thursday, December 17th, 2020.
Kenneth was born on the family farm to Herbert R. and Inga (Anderson) Peterson on August 10th, 1927. He was the 4th of 6 children. He attended Wakonda Public School and graduated in 1945. He served in the army during the Korean Conflict.
On June 7th, 1955, Kenny was united in marriage to Ilene Young at St. Patrick’s Parish, Wakonda. They shared their life together in their home south of Wakonda were he farmed and raised livestock. Kenny began farming in 1952 until his retirement in 1992 when they moved to Harrisburg/Sioux Falls for 12 years before returning to Wakonda. He took great pride and spent many hours working on his yard and flowers. He was a member of the St. Patrick’s Parish and served on the church council. Kenny and Ilene were married 65 years and had 4 children, 13 grandchildren and 16 great grandchildren.
He was a veteran and a lifetime member of the American Legion and served two terms as commander of the Gingrich-Dixon Legion Post 13. He proudly served as a member of the Honor Guard for 67 years. Kenny was excited to be part of the 2018 Midwest Honor Flight to visit the Washington D.C. war memorials. His love of travel took him to all 50 states and 13+ foreign countries.
Blessed to have shared his life are his wife, Ilene, his daughters Joan (Mike) Miller, Irene and Jan (Bob) Abbott, Sioux Falls, his sons Chuck (Nadeen) Peterson, Wakonda and Todd (Kelly) Peterson, Harrisburg. He was proud “Papa” of his 13 grandchildren, Dean, Emily, Jana, James, Thomas, Mary, Evan, Nick, Andy, Chad, Kelsey, Alex, Landon and 16 great-grandchildren, Ella, Daniel, Gabriel, Johnna, Arbor, Veda, Nash, Taylor, Madlyn, Callie, Eva, Nathan, Natalie, Brody, Sawyer, and Lawson.
Kenneth was preceded in death by his parents, 3 brothers Milo, Dale and Bernell, and 2 sisters Lucille Dwyer, and Darlene Sabag, nephews, Ronald Nelson and Tom Dwyer.
To send flowers to the family in memory of Kenneth W Peterson, please visit our flower store.