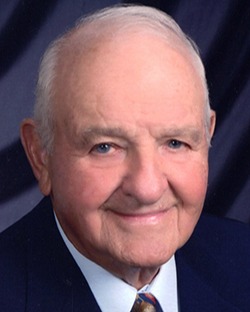 Dr. Ray E. Jensen, aged 92, passed away on Saturday, November 26, 2022, in Waco, Texas surrounded by his family. Ray was born on November 17, 1930, to Grant H. and Anna V. (Johnson) Jensen on his great uncle’s farm near Swan Lake, Turner County, South Dakota. He was an innovative scientist; an international traveler; a rancher; and an avid gardener.  Ray was a loving husband, father, grandfather, great grandfather, brother and uncle.

Ray never forgot his academic beginnings at Walshtown and Lincoln Districts in Yankton County, South Dakota and finally as an Irene High School Cardinal, graduating in 1948. He continued to attend class reunions including his 70th reunion. He spent his youth working on the family farm until his enlistment in the United States Air Force shortly after high school graduation. He served with the European Occupational Forces in Germany following WWII, the Berlin Airlift, and during the Korean War. He was trained as a weather observer, shaping the course of his future career.  After leaving the Air Force, Ray continued his educational studies. He earned a Bachelor of Science in Mathematics from North Dakota State University, studied at Iowa State University, and then earned a Doctor of Philosophy in Soil Physics from NDSU.

Ray was an agricultural meteorologist of international acclaim, being the recipient of multiple awards and medals for outstanding leadership throughout his illustrious career. He traveled around the world to share his knowledge, presenting numerous papers and invited presentations. Ray began his career with the National Weather Service as a weather forecaster in Fargo, North Dakota and was instrumental in saving countless lives during the 1957 Fargo F5 Tornado by providing a truly remarkable 1 hour and 3 minutes of advance warning to the citizens of Fargo. He continued to advance within the National Weather Service to progressively greater positions of responsibility, serving in 15 different geographical locations.  Ray retired as the Regional Director, Southern Region Headquarters, Fort Worth, Texas in January 1986.

In June 1986, Ray married Julie (Terrazas) Jensen in Bedford, Texas. Together Ray and Julie purchased a ranch northwest of Waco in Aquilla, Texas. Ray enjoyed his years as a cattle rancher and donkey wrangler. He was an avid gardener, planting a large vegetable garden every year. Ray also loved ornamental plants and maintained a large floral garden. He often brought plants back from his travels and scheduled vacations around botanical events.  He also enjoyed researching family history and sharing his findings with others.  Ray and Julie enjoyed international travel visiting the Christmas Markets of Germany and Austria 4 times and the Passion Play in Oberammergau, Germany 3 times as well as numerous other destinations.

He was preceded in death by his parents, his brother Keith L. Jensen, his sister Norma J. Skogen and husband Ray L. Skogen, his brother-in-law William J. Greulich, his ex-wife Margie A. (Halsey) Jensen, his niece Joni R. Skogen, and his nephew Barry K. Holm.

A local Memorial service will be held on Friday, December 30 at 11:00 AM at Aderhold Funeral Home chapel, West, Texas.

To send flowers to the family in memory of Ray E. Jensen, please visit our flower store.