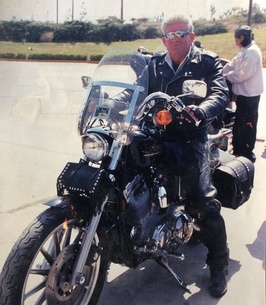 On Tuesday September 1st, 2020 Dennis (Denny) Sherrill passed away suddenly at the age of 69. Dennis was born August 13th, 1951 in Cherokee, IA to Dale and Shirley Sherrill. He attended high school at Central High School in Sioux City, IA holding a state record in pole vaulting. He graduated in 1970 and was shortly drafted into the Navy.
Dennis worked in the Navy as a Seabee from 1970 to 1973. He enjoyed talking about his work at the radio station, constructing bridges and his navy buddies.
Dennis was known as a jack of all trades. His charisma, fearlessness and love for risk taking gave him the ability to try anything. Dennis worked with his father at D&B Construction in Sioux City, IA in his early years leading to a degree in drafting. He owned an auto repair shop in Hartford, SD (Auto Creations and Care Center) as well as a cargo airplane business (Air Cargo Masters) in Sioux Falls, SD. In his life he was a Soldier, Construction Worker, Entrepreneur, Auto Mechanic, Race Car Driver, Airplane Pilot, Dairy Farm Hand and Maintenance Man.
Dennis was a friend to anyone. He was born to ride, whether it was a race car, snowmobile, horse or motorcycle. He was known as a hardworking, cowboy at heart. He loved Nascar, carpentry, his family and his dog Fred.
Dennis is preceded in death by his parents, Dale and Shirley and niece Misty. He is survived by his four daughters, Dana (Ryan) Irvine, Deanna (Josh) Johnson, Dawn (Josh) Johnson, and Denise (Shaun) Thelander, twelve grandchildren, his two sisters, Jeana (Don) Bailey and Joy (Bernie) Peterson, and several nieces and nephews.


**Flower deliveries may be dropped off at the funeral home**

To send flowers to the family in memory of Dennis LeRoy Sherrill, please visit our flower store.