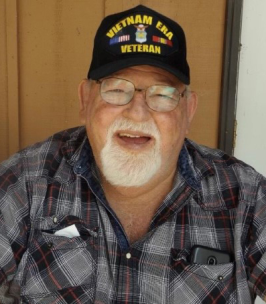 Richard James “Dick” Slowey, 75, of Yankton and formerly of Irene, SD passed away Tuesday, September 21, 2021, at Avera Sister James Care Center in Yankton.
Dick was born to James and Monica (Healy) Slowey in Yankton, SD on September 3, 1946. He grew up in Irene, SD and was drafted by the United States Marine Corp. He served in the Vietnam War and was awarded the Purple Heart. After serving in the military, Dick returned and lived in the Irene community for 25 years.
Dick married Ruth Ellen Stockland of Wakonda on January 20, 1968, at St. Patrick in Wakonda. Together they raised three children. Dick was a Volunteer Fireman and Ambulance Crew member, he was part of the American Legion and was Commander for a time. He was a Jaycee Member and worked with the Youth BB Gun Program. Besides volunteering his time, he worked for Aune Trucking, Hinseth Trucking, Irene-Viborg Coop, was the manager for the Irene City Bar, and he worked for the Yankton State Highway Department. He was then promoted to the foreman position at the Yankton State Highway Department and moved to Yankton, SD. Where he resided for the last 29 years.
Dick’s hobbies included a love of Hot Rods and flea markets. He was nick named the “Silver Tongue” for his negotiating skills. He met many friends in the Yankton Classic Car Club. During this time, he enjoyed working and participating in Poker Runs and the Yankton Riverboat Days Car Show. He attended many Back to the 50’s Car Shows in MN with his family and friends.
Dick loved his grandchildren and was named the “Baby Whisperer.” His favorite was to cuddle with them on his belly and take a nap.
Dick also enjoyed attending his grandchildren’s sporting events and playing with all the family members’ dogs. We started having Slowey Sunday gatherings where he enjoyed playing the Card Game, Up and Down the River. He loved going on road trips and stopping at small towns to visit with people. He loved his Military family and looked forward to talking about the good old days or the hardships of the war. You could always spot him with his Miltary cap on and could tell how proud of his Country he was.
Grateful for sharing his life were his wife, Ellen of Yankton, daughter Tina (Kim) Lee and gradchildren Morgan (Ryan) Myrvik, Taylor (Corey) Minarik, and Dallas Lee all of Irene, Mike (Beth) Slowey and grandchildren Jessica, Nate and Isaac Slowey all of Sioux Falls, SD, Dan (Laura) Slowey and grandchildren Jack, Sam, and Gabe Slowey all of Yankton, SD.
He also has many sister and brother-In-laws, nieces and nephews and special long-time friends. Dick had a continued friendship with his Vietnam buddies, Rich and Ben who served with him.
He is preceded in death by his parents Jim and Monica Slowey, brothers Jake and Bob Slowey, sister Joan and Brother-in-law James Kribell, many brother and sister In-laws, and Great-Granddaughter Monica Marie Myrvik.
To send flowers to the family in memory of Richard James "Dick" Slowey, please visit our flower store.

Scripture services will begin at 7:00pm.