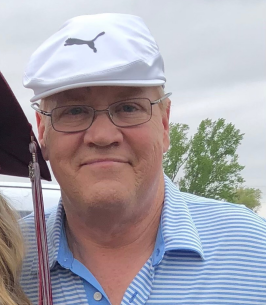 Mike was born to Donald, and Mary K. (Hood) Stewart on May 9th, 1964 in Vermillion. He was the baby of the family, with five older siblings. Mike had several nieces and nephews by the time he was a teenager, and he was everyone’s favorite uncle. The only question was, who was his favorite niece or nephew? Mike grew up in Vermillion, graduating from high school in 1982. He then attended the University of South Dakota in Springfield on a football scholarship. After college he moved back to Vermillion to work in the family business busting down and repairing tractor tires for the next three and a half decades. He took pride in his work, and developed techniques that would amaze on-watchers at what he was able to do with what he had. Mike loved boating on the Missouri River during the summer and would travel to wherever the snow was to snowmobile in the winter. Boating and snowmobiling were his main hobbies, but his true passion was the comradery he had with friends and living life to the fullest. He was always undoubtedly the life of the party, and everyone loved being around him listening to his stories. He may have taken a few creative liberties in those stories, but they were always fun to hear, no matter which version you got. Another passion Mike had was sports. No matter what the sport was, or what level, he loved getting into games, and likely would have a wager involved to make it even more interesting. Some of the best times he had was sitting with friends at the Charcoal watching a game.
On July 27th, 1991, he married Polly(Hood). Mike and Polly were blessed with three children, Kaitlyn, Trina, and Rachael. He loved his girls with everything he had, was proud of them, and would brag to his friends about them. He also passed on to his girls that ability to be the “life of the party. In his later years, Mike’s passion for living life to the fullest caught up with him and ensuing health issues caused a need for family and friends to care for him. He left indebted to them, especially to his daughters, and sister Ann who took care of her brother for his last years.
Mike is survived by his daughters Kaitlyn,Trina(Blaine Bottolfson), and Rachel and ex-wife Polly. He is also survived by siblings Chuck (Noreen)Stewart, Todd (Jenni) Stewart, Ann (Ron)Schoellerman, brother-in-law Bob (Judy) Devine, sister-in-law Jane Stewart, and Uncle Bob (Jewell) Hood and John Stewart, Rich Schoellerman, Blaine Schoellerman, Josh Stewart, Amy Fraser, Jill Stewart, Allison Stewart, Donny Stewart, Brittni Bjorum,Sarah Stewart, Tom Devine, Tyler Devine, and Shannon Bradley. Great nieces and nephews Johnny, Bram, Beck, Baye, Simone, Charlie, Rose, Kynlee, Londyn, Halle, Chance, Gage, Mya, Ella, Hadli, Tayli, Fynli, Mayble, Gweny, Lynus, and Obie. Mike is preceded in death by his parents, a brother, Steve Stewart and sister, Kathy Devine and a special niece Jenna.Pallbearers are Tom French, Doug Mart, Corey Lewis on, Mark Bottolfson, Blaine Bottolfson, & Rian Merrigan.
In Lieu of flowers, the family requests Vermillion High School/Booster Club Football.

To send flowers to the family in memory of Mike, please visit our flower store.

A time of sharing stories will begin at 7:00pm