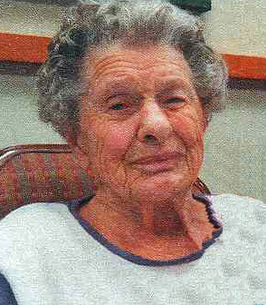 Luella Watson, 98, of Vermillion, SD passed away Friday, October 18, 2019 at the Sanford Vermillion Care Center.
Luella Gudmunson was born April 6, 1921 in Menno, SD to Magnus and Caroline (Hoffman) Gudmunson. She lived in Yankton and attended school there, and married Wally Watson on March 25, 1939. They spent time on the East coast before moving back to Vermillion where she worked for many years at the JC Penney store and also helped her husband in many endeavors over the years. They spent many years as Arizona “Snowbirds”, even after Wally passed in 1993. After a few years, she moved into an apartment at Town Square in Vermillion and in 2012 into the care center, where she enjoyed all the activities especially bingo.
She was preceded in death by her parents, her husband Wally, five sisters and two brothers.
She is survived by her children; Carolyn (Gordon) Thompson and Ron (Carmen) Watson, seven grandchildren, eighteen great grandchildren and seven great great grandchildren. A sister Wynona Collar of Oregon, sisters-in-law; Leona Buhler of Rapid City, SD and Blanche Quincey of Dell Rapids, SD and Wava Gudmunson of Battle Ground, WA and a brother-in-law Jim White of Parker, SD and many nieces and nephews.
To send flowers to the family in memory of Luella E Watson (Gudmunson), please visit our flower store.