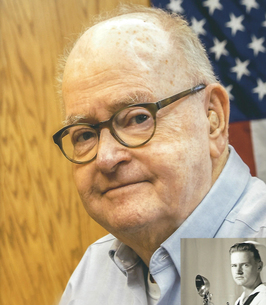 William “Bill” Willroth III, 87, of Vermillion, SD passed away Monday, March 11 at the Sanford Vermillion Care Center.
Bill was born April 25, 1931 to, Bill and Louise (Neumayr) Willroth and raised in Denison, IA. He was the 3rd William Henry so named in the Willroth family. It didn’t present much of a problem in those early days but became a little more confusing with 5 “Bill’s” in the family!
Bill graduated from the Denison Public Schools in 1949, played football for 4 years, participated in school plays, and journalism activities for the school yearbooks and paper. Bill also spent a lot of time at “Louie’s”, our town soda fountain and The Rex Pool Hall, good memories.
Bill picked up his first camera his freshman year, 1946, and had been taking pictures ever since. Bill also got interested in flying, right after WWII was over, he got a job at the local airport, working for flying instructions and flying time. He soloed for the first time when he was 15 years old and got his private license years later in 1953 in California, he loved flying!
Bill joined the Iowa National Guard shortly after the war, It was a field artillery unit, and he learned to be a No. Two Cannoneer in the 105 mm howitzer. He was Honorable discharged with the rank of corporal.
After graduating from high school, Bill joined the United Sates Navy in June 1949, he attended boot camp training in San Diego, CA. After training on an attack cargo type ship for several months, he was transferred to Guam, Marianas Islands, where he spent over two years as a Naval Operating Base photographer. Bill served as a naval photographer in the Korean War from 1950 to 1952. Following that, he was transferred to Sangley Point Naval Air Station, Manilla Philippine Islands, and finally to the Fleet Air Photo Lab, North Island Naval Air Station, San Diego, as an aerial photographer. Bill was discharged honorably in 1953 as a Photographer’s Mate Second Class.
In 1953, Bill married Joann Solberg, daughter of William and Elizabeth Solberg of Denison, IA. Together they spent over 60 years together raising one daughter, Susan and one son, Bill IV. As a family they spent many happy years together, they loved camping and boating and spent long hours on the Missouri River. Bill and Jo loved travel and roamed across most of the United States, a lot of Canada and the Cayman Islands.
In 1953, Bill enrolled in the Newspaper Production Class at the University of Iowa. He spent his remaining life in newspapering, printing & photography. After managing several newspapers, Bill & Jo ended up in Vermillion in 1963, where he took a job as a photographer for the Broadcaster. Bill & Jo purchased The Broadcaster in 1966 along with partner Jack Jacobsen. They also acquired the Plain Talk a few years later. Bill operated a large printing plant, printing at one time 22 different area newspapers and shoppers. After they sold the papers in 1984, he continued to edit The Plain Talk for a few years. Bill spent quite a few years on the Vermillion Development Corporation, The Newcastle/Vermillion bridge committee, and the Clay County Park Board. Bill also shot pictures for USD’s National Music Museum.
Bill was preceded in death by his brother Tom and lost his wife, Jo, to medical complications in April of 2014.
Bills brother Mark resides in Jefferson City, Missouri, and sister Mary lives in Omaha Nebraska. Bill has 6 grandchildren and 4 great grandchildren.
Memorial services will be 11:00 AM Friday, March 15 at the United church of Christ in Vermillion, SD.
To send flowers to the family in memory of William "Bill" Willroth III, please visit our flower store.